So what springs to mind as being the worst job ever? 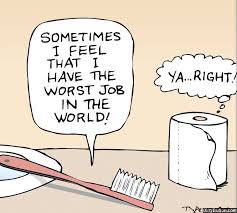 I immediately get an image of a plumber fixing a sewage line, which in my mind is quite a crappy job.  Another one would be a toll booth operator and any type of cleaner responsible for public toilets.  I appreciate the people who occupy these positions, but cannot help to think that they must have done something seriously wrong in previous lives to end up with these jobs.  Like spitting on a Pharaoh in Ancient Egypt or killing a cow in India.

But I never considered an air conditioner repairman to fall within that category.  This is what happened:

About two weeks ago my office air conditioner broke.  My office turned into a freezer in the morning and an oven by midday, due to it being autumn in South Africa.  It’s winter mornings and summer afternoons; as the battle for supremacy between the two seasons reach it’s peak.  Only for winter to win in about a month from now.

The repair man arrived to install the new unit and we were stuck together in the same space for four hours.  This repairman was as chilled as the units he repaired.  He was a big man, used to hard labour, unshaven, big hands with an open friendly face and a relax attitude.

I couldn’t leave the office as I had work to finish.  Mails needed to be send, spread sheets calculated and most importantly I had to finish my blog posting for the day.  I am very productive like that.  Now due to the long time we shared my office, we started talking about a lot of things and finally ended up talking about how many people lost their lives in our town this year, due to various terrible accidents.  (I always try and keep my conversations happy and uplifting.)

One of these accidents involved a motorcyclist.  The conversation that followed was one of the strangest I have ever had, it went something like this:

Aircon guy: “Oh yes that was the guy with all the tattoo’s.”

Pieter (whilst typing, making conversation):  “How did you know he had tattoo’s?”

Aircon guy (driving in a screw, standing on a ladder): “I saw the guy in the mortuary.”

Pieter (stopped typing, looked up with surprise): “What? How did you manage that?”

Aircon guy (still drilling): “I had to fix the air conditioner in the cooler of the mortuary.”

Pieter (forgetting to breathe): “What? Are you serious?”

Aircon guy (looking at me sarcastically, stopped drilling): “Well yes.  They need to keep the bodies cool you know, don’t want them to thaw out.  So the cooling system needed some repairs.”

Pieter (lifting his jaw from the floor): “WTF?  That is awful.  So what, you fix it with all the dead bodies lying around.  Aren’t the covered with sheets or something?”

Aircon guy (still surprised at my reaction): “They can’t move them anywhere.  (then with a fake laugh) No my friend, there is no sheets.  But the conditions are a lot better know.”

I have to pause here.  I need to make it clear that there is a person in my office who has seen dead bodies and he thinks I am the anomaly.  Remember I don’t work for the LAPD or any other crime unit, nor have I or know anyone who has seen a dead person, in real life.  (Does that last sentence make any sense?)

Let’s continue, it gets worse or better depending on how twisted your sense of humour is.

Pieter: “What do you mean the conditions are better now?”

Aircon guy (got of the ladder, wiping his hands) : “Well in the past they just used to throw them on a heap.”

Pieter (I am not sure how to explain the shocked expression on my face, it’s like the guy in the US hearing his wife is expecting octuplets.): “What?”

Aircon guy (still wiping) : “The bodies, they use to pile them on a heap until they start with the autopsies.  Like this one time there was a major accident and there were eight people who died.  They were in pretty bad shape, so it was just this heap of human parts.  I was trying to mentally put the bodies together, but they were too mangled.”

Pieter (I finally started laughing, admitting that Africa really is a tough country): “Are you kidding me?”

Aircon guy: “No, seriously.  And the smell  is also a lot better now.”

I desperately wanted to end the conversation for two reasons:  One, I was laughing so hard I was battling to breathe (probably more of a panic attack), and two I was genuinely afraid that the story would get worse.  Just to add a final spin on this bizarre conversation some random guy walked into the office and heard the last few sentences and this allowed him to add his own fifty cents worth.

Random guy: “I heard some guys who work there put their lunches in the fridges, with the bodies just to keep it cool.”

Aircon guy (not impressed at all): “Cheez, I wouldn’t do that.  I would definitely vacuum seal it first.”

I was convinced that I passed out and woke up in a bad episode of the Twilight Zone, but I knew that my list of worst jobs would now also include any repair work done in a mortuary.

And guys and gals, you can’t make this stuff up even if you tried…

6 thoughts on “He saw dead people.”