Please note, I actually spend quite some time editing my posts, if merely out of respect for the people who bother reading it.  So there is not a typing error in the title.  It is an actual word…

A survey was done by News24 and it revealed South African men to be spornosexual. Which sounds like the mating ritual of some kind of mushroom.  Maybe it’s just me, but there is something fundamentally wrong with society when we have to create words in order to define male and female.  I understand the need for words like heterosexual, homosexual, bisexual or even a-sexual (which mean you’re not getting any), but why do we also have words like metrosexual and spornosexual to describe men?  Aren’t woman confusing us enough as it is?

We all know that “metrosexual” describes this guy who is comfortable enough to pull of an Alice band.  Or at least try to.  Needless to say it didn’t become a thing. 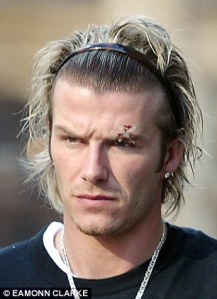 Fortunately I have this scar above my left eye which makes me look like a man.

But what makes a guy a SPORNOSEXUAL? Well, let me enlighten ye with littleth faith and hasth cometh from thy darkness.

Spornosexual men are and I quote “Well-groomed men with a love of sport and sex.”

Wait, is this not stating the obvious?

My Dad, who was born in the fifties, taught me that in order for you to find a girl who would be willing to have sex with you, one would be required to comply with certain basics.  Stuff like shit, shave, shower, adding a dash of deodorant and wearing a clean shirt.  Unless off course you prefer to have sex with yourself, in which case you probably only need a shower.  What I’m trying to convey is that there is nothing new under the sun.

Oh and let’s not forget that another quality of the spornosexual male would be a love of sport.  No shit Sherlock, that includes every man I know!

But in the words of every infomercial ever aired on television: But wait there’s more…

The surveyors interviewed 4,739 South African men.  Last time I checked, South Africa had a population of around 54 million people.  Let’s assume a third of these are made up of the stand-and-pee variety.  (I’m excluding feminists)  The survey had the balls to go ahead and publish a generalised view of the South African male based on feedback received from a mere 0,026% of males.  This only seems fair if you’re stupid.  For who amongst us can claim that they know any man who would complete a form with 100% honesty, considering that some of the questions would be about the size of their member? Never mind bothering completing it in the first place. We can’t even concentrate long enough to put the damn seat back down.

If we throw caution into the wind, suspend our disbelief to another galaxy; and then proceed to consider every word published on the Internet to be true, then it would imply that the rugby playing Wolverine needs a shaver and some night-cream.  Being the spornosexual man that I’m perceived to be, I have included a few tid-bits for your laughing pleasure.

And we all know it goes without saying that it’s absolute bull shit for any guy to emphasize the importance of having a custom made suit, especially considering most of the men in the country does not live in a high-rise metropolitan area where traffic, crime and loadshedding is a daily thing.  Why would we need a suit?  What event might occur in rural South Africa that would make men go: “Mmm, if only I had a custom-made suit?” The options are slim and would range from the annual fair, having dinner with the in-laws, chaperoning Princess and all her friends, someone turning 40, Mother’s day and let’s not forget the very classy, watching-the-cows-come-home thingy.

This is me! This is me! Except the part of requiring a wingman. I’m married.

I have to admit, they nailed this one.  Bull’s eye accuracy.  Except for the wingman thing.  Who needs a wingman when we have all that rustic, African charm boiling inside?  Anyhow, South African men love to braai, and this will be used as an excuse to invite the mates and drink beer.  We do it because we can.  I will provide this scientific research as proof to the Wife that I’m not socially dependable.  Every man is.  But let’s be honest, did we really need a survey to tell us this?  That is like someone running a survey to determine whether the sun rises at the start of a day.

Getting to the hard stuff.  (No pun intended.)  Talking about relationships.  About the Wife and the girlfried. Sorry, I meant to say or. Or the girlfriend.  It’s the one thing men do so well, discussing our intimate feelings, our deepest emotions with a random stranger in a public place when he/she is wearing a lab coat and clipboard.  Ya right… If only this wasn’t another aspect of a man’s life where we have honed the skill to lie with a straight face.

Yes love, you look lovely. No that dress doesn’t make you look fat, it’s the food you eat that makes you look fat.

The full info graphic is available from www.news24.com please go ahead and read the rest.  You have the chance to determine whether you are also considered a Spornosexual male.  Something that will have no impact on your life whatsoever.

I’m forty plus, past the point of obsessing what other people think of my appearance, consider most surveys to be the spawn of satan and can’t grow a full beard, so I’m disqualified.  I’m now officially stuck being an average, happy heterosexual guy; who loves my family and have great friends.  I write a little and enjoy an occasional glass of wine.

(The Wife’s snorting, wonder why?)