No roller-coaster can hold a candle to the real life twists and turns we encounter during our daily existence on this planet of ours.  People provide excitement, surprises, irony, weirdness and many other thrills, chills and spills that no man-made joyride can even attempt to reciprocate.  And I’m not even referring to the usual suspects like Miley, Kanye or Lady Gaga.

I just read an article on http://www.billboard.com where Art Garfunkel called his once, long time collaborator, Paul Simon, amongst other things a “monster”, “jerk” and “idiot” for leaving him in 1971 at the height of the duo’s career.  Bitter anyone?  For those of you who were born in the nineties or have been living under a rock, the duo I’m referring to is none other than Simon and Garfunkel.  Still doesn’t ring a bell?  “Mrs Robinson, are you trying to seduce me?”  Still not?  I have to admit it was also before my time, as my Dad was still trying to get to first base whilst that song played on the radio.

The long and short of it is that Paul Simon dumped Art Garfunkel and went on his own merry way, wearing diamonds on the soles of his shoes, just as Bridge over troubled water became a world-wide phenomenon.  It became their signature song from their fifth and final album.  Not only did this song chart in every country, except Middle Earth and Panem, it also won six Grammy’s.  And sold over six million copies. (Too many sixes maybe…da da da…) 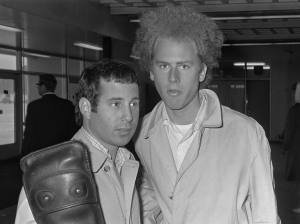 “I didn’t leave him because of his hair, I swear”, said Paul Simon. (allegedly)
Photo courtesy of Wikipedia.

The irony is that this song was actually performed as a solo by Garfunkel himself.  Simon wanted bigger things, told Garfunkel to call him Al if he ever wanted to call him and left.  Art having lost half of the band’s name, became a math teacher.  Let it be known that there is nothing wrong with being a math teacher or a kindergarden teacher for that matter, but it’s merely another example of why we have the phrase “WTF?”  Truth is indeed stranger than fiction.  You can read the full article here, but please remember to close your mouth after you finished as it might be fly season.

There may be those who would argue that Art had reason to go public in a semi-rant over his long-lost pal.  And these arguments would fall in the same category as those defending the existence of fairies and other bull shit.  Not that I think fairies are bull shit, I just don’t think they exist.  Like the Tooth F… um, I mean like Santa Cl…shucks.

The reason for his badmouthing and foul mood is an obvious pile of sour grapes.  What is even more shocking is the fact that 1970 was 45 years ago and old Art is still filled with resentment at Paul for seeking a successful solo career.  Way. Back. When.  Talk about beating a dead horse. Art Garfunkel gives new meaning to the concept of keeping grudges.  And seeking publicity.  And being a douchebag.

Don’t you think it’s time to move on?  Get over it?  And maybe do something about your hair?  Ever heard of gel? Or scissors? We’re not in the eighties anymore, my friend.

Looking back, you guys made great music, had a good run, did a few gigs together, became famous, and then they threw in a lifetime Grammy for good measure.  So. Just. Let it go.  It’s time to built your own little BRIDGE OVER TROUBLED WATER.  A song that came full circle, performed by the great Simon and Garfunkel, or a duo I’m now going to call the “The Grinch and Paul Simon”.

10 thoughts on “Art, it’s time YOU built a bridge over troubled water.”