In order to ensure that you understand the ramblings appearing on this site, please allow for a small introduction.  I am Ah Dad…but let’s start with a family-selfie aka  A FALFIE 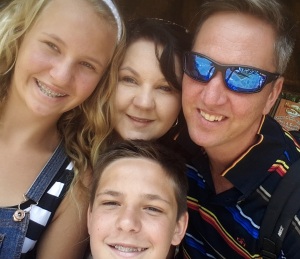 I don’t live in a big city because I’m not crazy. What is not known about my country is the blissful eastern parts where the Drakensberg mountains creates the perfect setting for some of the most beautiful sunsets known to man. Where is my wine…?

I’m married.  This statement normally has two typical reactions, “No, it wasn’t an arranged marriage” and “Yes, I’m as surprised as you are”. Either way, I’m living proof that geeks get the best chicks.  We’ve been married for 19 years and she’s never considered divorce.  Poison yes, divorce never.  She knows I won’t be able to cope on my own.  Wife didn’t really have a choice in accepting my marriage proposal because it was one of the conditions for her release from captivity.  My captivity.  I always knew it was going to take some serious effort to find me a Wife.  It was easier once I got the chloroform.

We’ve got kids.  Yes, you would be correct in assuming we’ve done the nasty at least twice.  Our youngest is now 14, which makes our last time to be…uh…14 years and nine months ago.  Give or take a week.  My kids are great.  Especially when they’re asleep. They are both teenagers.  Hormone invested, irrational, temperamental creatures of joy.  They provide me with an understanding as to why some animals species eat their young.  Dude and Princess, who used to be little bundles of joy, has since become semi-detached, but remain my motivation for this blog.  I started out reflecting on life, but it soon changed into paragraphs I want them to read.  It is my stories on attitude, friends, lessons learned and moments in life, like how I fell in love with the Wife.  They are a pigeon pair for which I’m eternally grateful.

If Princess turned out to be another Dude, we would have had to try again.  Wife really wanted a girl.  Fortunately I made sure #2 was a girl.  Otherwise I would have had been stuck with three or more of those little things that need constant feeding.  And let’s face it, three kids are three kids more than what I can handle with moderate success.  It should be said that Wife has been stuck with three kids in the house since she gave birth to two and found the third on a date.  And all of us are servants to the King of our house, a gay French Poodle.

Being a Dad is awesome.  For many reasons.  Like not being able to watch a game without interruption.  Or having to explain a movie.  Over and over.  Or having to do things on a Saturday, which is the holy day for most men who watch sport.  And it will be a long list of things that you really, really, really want to do.  Like cleaning gutters.  Or drilling holes. Or cleaning the pool. Or being an exterminator.  Of spiders.  And bats. And cockroaches. And all these things will take you away from the television.

Then there’s the reality of turning into your own father, albeit slowly.  Fortunately I have a Wife who reminds me of this fact every now and again.  So I can pull back on the ‘When-I-was-your-age-stories’.  Another benefit of becoming a Dad, besides acquiring the skill of changing a diaper without vomiting, is that there’s another day where you receive gifts which you undoubtedly paid for.  It’s called Father’s day. I have received so much arbitrary shit on this annual day, I can probably open a thrift shop. The best gifts are those ones I pick myself. (I’m kidding, I love your gifts.)

I just turned forty.  O-kay, I’ve actually been forty for two years now.  No-one really cares how far beyond you are from forty.  Teenagers look at you in a different way as soon as you reached the age of ‘old’. Forty is as bad as it sounds. If only for fact that you start making noises when you get up. Or sit down.  Even from a couch.  And I’m not even talking about the bowl movements which is a whole other blog.  Your hair changes colour overnight and you look like Gandalf the White returning from his fight with the Balrog.  Only with less beard.

I can’t grow a full beard.  When I attempt this manly feat, I end up looking like a refugee who underwent torture and got parts of the beard pulled out. I will never complain about my grey hair for at least I still have hair.  Which is kind of awesome and makes me look kind of sexy.  Not George Clooney sexy, more middle-aged, suburban Dad with teenagers sexy.  And I don’t think I have a head for baldness.  Some men do, me not so much.  I’ll look like a very long pole with a large piece of gum stuck on the end.  At least it means I’m not fat.

And being not-fat doesn’t just happen.  It’s much easier to be fat-and-forty than fit-and-forty.  Mainly because your metabolism took self-control and got married in Vegas, never to return. It takes damn hard work to look ‘not-fat’ because we are not even remotely attempting the alternative, which is ‘fit’.  My main motivation for doing what I’m doing would be that my salary is not big enough to replace my wardrobe with bigger size clothes. So I get up every weekday at the crack of dawn and go to the gym. I do this because I’m f-cking stupid.  It also helps to control the urge of smashing the faces of some of my esteemed colleagues with a snow-globe.  Or a conference table.

My attempt at fitness is also a counter balance for my consumption of red wine.  Which I love by the way.  Alcohol doesn’t compliment low body-fat percentage.  But I’m married so I don’t really have a desire to have veins that pop like rivers on Google Maps.  My consumption of wine is therefore another reason why I’ll never end up on a magazine cover.  Well that and the fact that I’m nobody.  But I’m gonna stick to the red wine story.  It builds my confidence to know that one day when I quit drinking wine, Men’s Health will phone me for their September issue.  A friend asked me the other day where do I keep my wine once I opened it.  My immediate reaction was “In the dustbin off course”.  An open  bottle of wine implies an empty one a few minutes later.  I was dumbstruck to learn that some people open a bottle and then… Only. Have. One. Glass.  The horror!  I didn’t sleep for a week.  See, I’m surrounded by crazy people!

I basically take daily lessons from Wife, the most amazing woman in the Universe and then some from those other two, namely Dude and Princess. Lessons on being a better dad, a better husband; basically a better human being.  Did I mention that I have great friends?  Not Facebook friends, real ones.  I like existing on this spinning blue ball.  And whilst alive I need to write,  or else I die.

What else is there?  Oh yes, I travel every now and again.

Welcome to my life.

I also include a link of an interview I had with Mrs Vanilla in 2013 which gives a little extra information on who I am.

Then there’s this little interview with Dean in 2014, over at Mother’s Little Steps. If you’re interested.