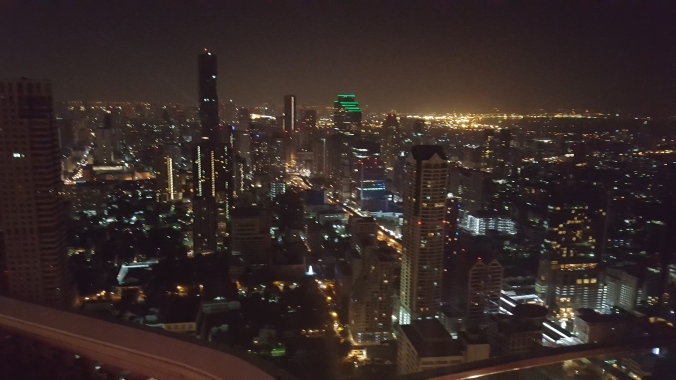 In the past I would arrive in a new city, drop my luggage and go and explore.  Those were the days…of my youth.

Now I’m basically too exhausted to do anything.  It’s mainly due to delayed flights, many hours in transit, long hours in a cab, age, disturbingly long queues through customs and me not being able to sleep through any of it. (Did I say age?)  In summary, it took my almost 32 hours to get from my house to the hotel in Bangkok. And I had a function to attend.  I’m not complaining, it’s business after all… END_OF_DOCUMENT_TOKEN_TO_BE_REPLACED

Forget that the rain in Spain falls mainly on the plain. The guys don’t speak a lot of British over here. They couldn’t care less how well rounded your pronounication might be. It’s all about espanol. In order to assist, if you should you ever find yourself in these neck of the woods, here are the most important phrases to learn when conversing with a Spanish bartender.

This phrase prepares the soil for the rest of the evening. It’s a simple hello, how are you? Botch this up and you might as well leave now. It’s considered a friendly greeting when said in a upbeat, smiling tone. It also proves that your mother didn’t raise an animal. END_OF_DOCUMENT_TOKEN_TO_BE_REPLACED

Everyone has a bad day. I know, I might even be able to fill a book with them. Oh wait, I’m already doing it here.

But there are normal bad days and then there are days when you stroll into the kitchen, half asleep and casually open the fridge and the whole damn door disconnects from its hinges and ends up on the floor.  Those are the days when you know it’s better to get back in bed and hide from the world.  Karma is finally coming for you in all her biaatchness for kicking kittens in a past life.  The rest of your day is going to be like sitting in a sauna in the steam of hell. With your fat uncle. END_OF_DOCUMENT_TOKEN_TO_BE_REPLACED

Remember this?  If you don’t, then The Bangles is probably a reference to jewellery, MacGyver is a miss-pronunciation of McGruber and Mr T is NOT a member of the A-Team.

However, once upon a time, when kids were still kids and sex and drugs only belonged to the Hippies, Tramps and Heavy Metal Bands, all those innocent eyes were glued to this Disney series.  Eagerly anticipating the weekly, random adventures of Gummi, Gruffy, Sunny and Co.  What made it such a great show, was the fact that, with the help of a little gummi-berry juice, these bears became even greater versions of themselves.  Semi-super-heroes.  This enabled them to outwit, or technically out-jump, all those stupid, awful trolls, who shared the forest they lived in.  And then, if you’re not hooked already, the few humans who were fortunate enough to share in the sweet taste of the gummi-berry juice, gained super strength.  Yes, it was that awesome…

What is a little known fact is that the creators of this series, got the idea after attending a frat party.  They were seeing all the students bouncing around from having a beer or a glass of wine or both or several and then, WA-LAH, the Gummy-Bears were born.  We all know that most alcoholic beverages has the potential to create enhanced versions of ourselves, whilst serving the dual purpose of dulling the boredom of modern day life.  And people.  But just like the gummy-berry juice, once the user has too much of the al-co-hol,  there will always be disastrous consequences.

Our subconscious minds are programmed, believe it or not, to do its utmost preventing us from making a total ass of ourselves.  It’s a built in form of self-preservation.  Unfortunately alcohol doesn’t help this cause.  At some point al-co-hol becomes the formaldehyde cloth over your mind, forcing your inhibition and brain into a comatose state.  And in most cases, just before it’s lights out, your brain will have a final attempt at screaming the warning of “DON’T HAVE ANOTHER ONE!”, which will be ignored by two out of three sane, contributing members of society. And then all hell will break lose.

When you hear that final scream echoing through your slightly intoxicated state, remember that one jug of gummi-berry juice too many, might imply the difference between:

So next time you attend a function in the presence of gummy-berry juice, it might be wise to establish some internal locus of control, thereby preventing you from going back the next day, apologizing to the host for the couch in his pool and collecting the kids you forgot.

For alcohol is an evil ogre.  Whilst you handle it with respect; nothing happens and both of you will stand, laughing, leaning on one another having a jolly good time.  But as soon as you start slinging abuse and showing obvious disrespect, well, that is when the same ogre will take your bottom jaw, pull it over your nose and blow so much air up your ass, you’ll be floating away just like that poor frog in Shrek.

Just saying.  And now we have no more excuses.

Disclaimer:
The writer has no personal experience in any of the adverse effects of alcohol, and only writes his theories based on research.  Well unless you exclude the face-plant episode and the mumbling fool and the…

To me German culture is synonymous with the Oktoberfest, which I had the opportunity to attend in 2010. I have never seen so many people in one place, and that is counting Mumbai, India. This is Disneyland for grown ups!

I was tired and I was three hours away from my next flight.  It was just after 2′ clock in the afternoon.  I arrived back at the hotel just to use the last few moments of free wi-fi and maybe get some e-mails out, write a report or two.

I opted for a table outside, sitting in the sun, maybe catch a slight breeze coming from the ocean spread out in front of me.  On my approach I saw a middle aged man with big rimmed mirror sunglasses.  Looked like he was on vacation, alone.  In front of him was a Heineken draft.

It was a tall glass, with the clear yellowish liquid shining in the light, the white foam lying on top like cream on pudding.  The humid air created a thousand droplets on the side of the icecold beer glass.  My throat went dry.  I couldn’t resist, “Look’s good”, I said, as I passed his table, I think he lifted the glass and smiled.

I sat down a few tables away and immediately ordered the same.  I opened my laptop and waited for the automatic connection.

“I always change into more casual clothes when I’ve finished my work for the day,” someone said.

“Excuse me,” turning to the source of the voice.  It was the guy with the glasses.

“Yes, I suppose, but I am flying in a few hours, and work needs to be done,”  I replied friendly.

He said, and I quote: “I know, but to only work does not create for a balanced soul, you also have to take a moment and enjoy your surroundings appreciating where you are, before the moment goes away.”  That should have been my queue that this guy was on something.

“I suppose,” and returned to my work.  He persisted with comments about living your life, and enjoying the sun and embracing the moment.  Eventually I found out that he was a German, working in the light fitting industry, and also travelling on business.  When my beer came he invited me over to his table.

When I read this story again and think of the conversation we had, I am still surpised that I joined him.  My mind must have been altered due to the lack of social conversation after a week.  I assumed at that point that any company would be great company.  Not the case.

So now we are chatting away on trivial things like travelling, business in Oman and the coutries where we come from.  Everything seems relatively normal, until he started unbotting his shirt.  At first I didn’t think anything of it, just enjoying my Heineken, but then his questions became slightly altered.  Sfuff like my relationship status, and if I normally travel alone.

My radar went on high alert and he kept on unbotting his shirt, looking at me through his mirrored glasses.  My situation became desperate and my mind was in flight mode.  Eventually he untucked his shirt which by now was totally unbottened.  He laid back exposing a very hairy chest and stomach region.  I think my bottom jaw cracked the table.

I wanted to puke at this point, but wait there’s more!  He started stroking his chest!  I still gets shivers thinking about it, the image that has scarred me for the rest of my life.  The middle aged German stroking his exposed chest hair..Uggh, shivers again.  I ducked, couldn’t take it when; and this might be my imagination, which I sincerely hope it is, he smacked his lips…

Sitting back at my table I downed the rest of my beer and ordered another one.  I sat like a wounded animal licking my wounds.  I was replaying the last 10 minutes of my life, the freakist conversation of my life.

I am still trying to figure out what happened that day.  Maybe the guy was a bit hot from sitting in the sun, maybe he wanted to get a tan, maybe he didn’t even realise what he was doing.  But there are two questions that bug me the most:

1. Is this how woman feel when approached by a sleazebag?