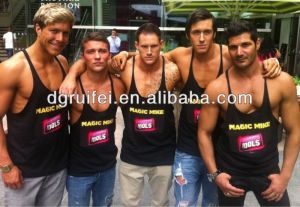 Thanks http://www.alibaba.com for proving that men wearing stringy vests doesn’t look gay at all.

On this planet you will find some human beings in peak condition, making normal people look like shit.  Fit guys and gals who have too much discipline and absolutely no life whatsoever, for why else would you be able to spend countless hours in a gym AND follow a diet made up of turkey meat, protein shakes and cardboard.

I  have been brainwashed and joined the masses as a person who is trying his best to look less shitty.  END_OF_DOCUMENT_TOKEN_TO_BE_REPLACED

Since my exposure to all the brilliant stories on this blogging site, my disgust of bad literature has increased exponentially. I have come to appreciate the ability some unpublished writers have at crafting a piece of art that not only blows my mind, but feeds my soul.  In some cases giving me an hysterical outburst, snorting coffee all over my keyboard.

I therefore loathe people who are able to sell millions of books that contains utter crap.  And in the bottomless pit of disgraceful literature, lies the atrocity that is “50 Shades of Grey”.  And I’m being kind.  To call this a novel would imply that I consider it equal to other books that was written by actual authors.  If I do that, the Great Writers will rise from the dead, hunt me down and kill me, so I am not going to call this a novel again. END_OF_DOCUMENT_TOKEN_TO_BE_REPLACED

“You’re an Idealist!” shouted the website after completion of the Keirsey Personality Type test.  It was a slow day at work.

I must admit, the test lost some credibility when it opted for three different cat expressions as an answer to one of the questions.  Can we not get rid of these damn cat pictures?  It’s like an Internet infestation!

Back to the topic at hand… Mind you, did I just lose half of my followers after that little outburst on felines?  I can’t help it, they’re such condescending animals.  They remind me of the girls in 7th grade.  So full of themselves, thinking they’re better than everyone else.  All high and mighty, ascending a throne from an even higher horse.  Pompous and self-righteous and bitchy.  And I’m still talking about the cats. END_OF_DOCUMENT_TOKEN_TO_BE_REPLACED

My disgust of bad literature increased exponentially since I entered into the waters of words and stories on this site.  I have come to appreciate the ability some unpublished writers have at crafting a piece of written art that blows my mind and feeds my being.  In some cases giving me an hysterical outburst.  I therefore loathe people who sells millions of books containing utter crap.  And in the bottomless pit of disgraceful literature lies the atrocity that is 50 shades of Grey.  To even call it a novel would imply that I consider it amongst other writers who actually wrote something amazing.  The Great Writers will rise from the dead, hunt me down and kill me, if I dare call this a novel again. 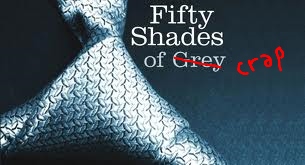 Do I consider myself an esteemed writer, one worthy of criticizing another’s effort? No I don’t, but I’m writing this because I can.  I only feel stupid for not realising sooner in life that success would reside in me writing down all my sexual fantasies in chronological order, without any consideration or effort to make it interesting.

I have discovered numerous successful novels from best seller lists.  Great trilogy’s loved by many people.  There’s the Millennium trilogy (Girl with the Dragon tattoo being the first one) and the Hunger Games trilogy.  I even enjoyed Harry Potter.  When people started talking about this book, I didn’t even think twice about NOT reading it.  How can 70 million people be wrong?  Well they can and they were.  Very wrong.

This book singlehandedly altered how I buy books.  I refuse to jump on a book wagon again, promoting the latest best seller, out of fear that I might end up at the bottom of a cliff with all my trust in other readers shattered beyond repair.  Again.

Anyhow, my rant was triggered by a headline that some studio is actually moving forward with making a movie and that they are now looking for two actors to play the leads.  WTF! Seriously?  Which right-minded A-list actors would even consider appearing in such tripe?  Do we really want to see Ryan Gosling or Emma Watson appearing in a high-end porn movie?  NO WE DON’T.  Because what else could the movie be based on?  The book is a collection of poorly described sex scenes, spaced between eating, showering, dinner parties,  work and descriptions of how Christian’s jeans fit him.  Nothing else happens!  And just to get to the minimum quota of pages, the writer (I want to be sick) adds page after page of text messages.

If I ever have to read the words “oh my”, “baby” or “my inner goddess” again I will have a fit of which I will never be able to recover.  They might as well switch of the machines.

Some people claim that it has generated positive awareness of sex, not seen since the seventies.  Great, as a man I’m all for that.  But why would you create a character that is so farfetched that it forces me to consider the Land of OZ as my next summer destination.  Seems less ridiculous.  The writer (I want to be sick again) stated that she based the books on some of her own fantasies.  Poor husband.  Christian Grey is the weakest written character since Barney the fucking Dinosaur.  This woman considered every known word that would compliment a man and then stuffed them all in a paragraph and BOOM! Christian Grey was born.   And then she tried to make him more human and sympathetic by adding a few bad ones.  A prostitute mother, kinky sex and a fear of anyone touching his chest.

And why does Bella appear in this book again?  I thought she turned into a shining, super powered vampire who doesn’t consume human blood.  Didn’t the lady notice that her character was already used in another blood suckingly bad trilogy?  At least that one had some weird-looking cult wanting to kill them.  That’s an idea.  Kill them.  Both. Slowly.  (Maybe she did, I see there’s two more Greys out there.)

Have we become so lazy as an audience that a recipe for a good read would be: