I’ve mentioned that Dude loves drama.  And not in the way the Kardashians or any one of the other Housewive-shitshows like drama.  He likes to act.  In a play.  On a stage.

Their high school puts on a play every year and Dude has been lucky enough to get a role every year since he joined.  It’s four years now.  What can I say?  The apple falls very far from the tree.  Like miiiiiiiiles…

It all good, except for the little known fact that he has been cast as the villain in the last three plays he was in.  Portraying revolting creatures, crafted from the foul scraps left over when they drained the cesspool of humanity.  Kids who are degenerates of society. END_OF_DOCUMENT_TOKEN_TO_BE_REPLACED

It’s was dark and wet.  The sun gave up supremacy over the skies hours ago.  The rain was relentless, descending from the heavens in bucket loads. A cold wind was howling around the corners of the house, looking for an opening, tormenting the window shutters.  He listens to the wailing of the wind.  Hanging upside down, he watches his victims intently with small, beady eyes.  He adjust his wings, not making a sound.  The anticipation is almost too much to bear.  But he has to wait.  He takes a quiet breath.  Finally they settle in the dimly lit lounge.  Snuggling under a blanket with the light of the television dancing on their faces.  He cracks an evil smile.   It was time…

END_OF_DOCUMENT_TOKEN_TO_BE_REPLACED

I am disgusted, dissapointed and frankly speaking, sligtly pissed off.  All because of a wellknown sportstar who doesn’t know how to treat woman.  And I don’t care how mad she made him or whatever else she might have done it is no excuse to randomly shoot her.  My friggin goodness, did it really happen?

I know the investigation is still ongoing but the Bladerunner remains the suspect in a murder case and as the facts are surfacing, it is not painting a pretty picture.  Awful revelations such as the fact that she was hiding in the toilet when she was shot four times.  It remains a terrible tragedy. And it happened the day before South Africans wore black on Black Friday, an initiative to show support for woman and children who has become victims of violence.

I always believed that the role of men was to protect their families and cherish their wives.  To treat them like the jewels in our crown, like the delicate flowers  that they are.   It is not a chauvinistic view of woman being the weaker sex, for my wife is the rock of my life.  My anchor to keep me firmly grounded.  It is about the role of man to respect them, love them, support them and above all NOT.TO. HURT. THEM. In a country where a woman is raped every 17 seconds, yes this is not a typo, it is heartbreaking to see another woman dying at the hands of man.  And yes it does make it worse the fact that he is a wellknown sportstar.  It is disgraceful.  I don’t care what the scenario is, you may never, never, ever raise your hand to a woman.

Charlize Theron, our very own Oscar winner, was the face of a campaign  a few years ago that said: Real men don’t rape.  I think it goes further than that, real men don’t hurt woman or children. Thinking ourselves to be  the stronger sex, do we really need to proof our manhood with violence? I am wondering how many real men is still out there today?  As the father of a young woman I want to ask: CAN THE REAL MEN PLEASE STAND  UP?

I teach my son respect, therefore he is not even allowed to raise his voice to my wife.  It is still sligtly difficult when fighting with his sister.  I am writing this to tell my little princess that if you ever find yourself in a relationship with a man who does not respect you, get out.  (I am obviously praying that this never happen.)  Point is, if a man does not treat you like the princess you are, leave.  You will not be able to change him.  You might be heartbroken but at least your body will remain intact.

And to all the woman out there who are in abusive relationships, you have heard this a milion times, get out.  Save your life and if there are kids, save them too.  He is not worth your love. Am I simplifying it, maybe, but as a logical thiking human being what is the alternative?

And yes my darling daughter, there are real men out there, because they just stood up.

It is all over the news by now.  Unless you do not have Internet, or cannot access CNN or BBC or SKY then this would be news for you:

Oscar Pistorius, the Bladerunner,  shot his girlfriend yesterday in the early hours of the morning, killing her. 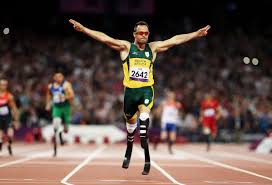 Understand this:  Even in a country where random acts of violence are being reported daily, this is still the most shocking news to come out of our country in a very long time.  People are stunned and sad and shocked.  We don’t even want to talk about it.  Everyone is just filtering information, processing this in silence.  When the story broke, most of us simply did not want to believe it.  (Writer included).   How can one of the most inspirational and influential South Africans of the last decade turn out to be a murderer?  How can the poster boy of South African sport suddenly turn into a criminal, a thug overnight?

Like so many events during the past few weeks, I found myself trying to figure out why this shit is constantly happening in the world we live in.  Random shootings of toddlers @ schools in the US, Indian gang rape, and so many other gruesome stories congesting our airways daily, a pile-up of violence and bad news.  Is this an indication of our modern, civil society?  Have people across the globe become so disillusioned and desolate that picking up a gun is the only solution?

But why do our heroes fall?  We seen history repeating itself again and again, a fresh, obvious example Lance Armstrong.  People that we place on pedestals, then with brittle feet of clay, they lose their balance and tumble hard, taking all our hopes and inspiration with them.  Aren’t these guys suppose to be our heroes?  *Cue patriotic music.*  Aren’t they suppose to be a beacon of light when the darkness comes?

One thing that we sometimes tend to forget of our selected heroes is there one fundamental flaw.  Humanity.  It doesn’t matter how high we lift them, they remain human beings.  Human beings that will make mistakes.  Their drive to succeed might be an inspiration, and their success motivation, but being famous does not make you invincible.  It does not grant you any superpowers.  More proof exist in a long list of names of modern sport stars who crumbled from the top: Tiger Woods, Hansie Kronje, Joost vd Westhuizen.

The reality remains that there will always be heroes, there will always be those men and woman whom kids will admire.  Their faces plastered as pictures on their bedroom walls.  And kids need heroes.  They need to be inspired, they need to know that anything is possible.  Going through life then connecting with that one story gives them the confidence that they can di it too.

My prayer today is that God give parents across the globe the wisdom and ability to be the hero for our kids.  Let us stand up and become Captain Dad or Mrs Marvelous Mom for them.  As mortal beings we are no less able to inspire than any other celebrity or sports icon.  We need to become the heroes for our children.  We need to become their inspiration, their hope and their poster child for anything is possible.  We will make mistakes, that’s as real as the bullets that killed Reeva Schoeman, but we can fix them.  And it might even be easier to fix those errors when their hero lives in the same house.

With everything being said I am still left with a feeling of confusion, disappointed and anger.  My mind is racing with a million thoughts, all jammed into my 10-year-old daughter’s question she asked last night:

“But why dad?  Why did he have to kill her?  He was so famous.  Everyone looked up to him.”

“I know my girl.”  but in reality I don’t.  I don’t know why because I don’t understand why.