We took a week off last month.  It was during the winter break and that meant Wife, Dude and Princess were lounging around the house for three weeks, whilst yours truly were still grinding away (in a non-sexual way), working myself to death in the harshness of an air conditioned office.  Albeit in a very comfortable leather chair, streaming music and a cup of coffee every now and again.  Life is hard.

We love music festivals so we decided to take a week and head up north to attend Innibos.  A wonderful festival of music, food, art and wine.  Or beer.  The festival is even more fun if you are a fan of Afrikaans music.  If you’re not, or you don’t understand the language, then you probably won’t enjoy the festival as much as we did.  Keeping in mind there is still beer.

During our little tour of Mpumalanga, which is the name of the province we were in and not an exotic dancer, Princess and I broke the law.  The place is called Bourkes Luck Potholes and as I’m not a travel agent, you are more than welcome to Google it, or do a quick browse of a few photos of the place by clicking on this word.

It is truly beautiful and there’s a lot of footpaths scattered across the site to take in the scenery from every possible angle.  There is also quite a few signs scattered across the same footpaths, warning pedestrians not to go beyond certain points.  Mainly because falling of a cliff can be detrimental to your health, even if it is a waterfall.

I might seem like your typical handsome, dashing and extremely strong middle aged man but in actual fact, I’m terrified of heights.  I’m not sure how I will die, but I’m 1000% convinced that it won’t be from falling off a cliff or a three story building.  Or the big slide at the park.  I become a paranoid banshee every time one of my family members venture to close to the edge of any higher ground.  That includes arguments.  Based on past experiences, the safe distance is 2.63 meters, which is even further when you measure it in foot.  It is a very specific distance because anything closer than that makes my voice disappear, as my hysteric screams of panic reach supersonic levels.

Back to me breaking the law.

Whilst strolling along the footpath, away from the cliff, I suddenly felt an urge to do something impulsive, to break rules, to feel some adrenalin pumping through my veins, to feel alive!  So I ventured off the footpath we were on and ignored the sign that was trying to save my life.  I went off the beaten track.  And here is the evidence of that wild moment. 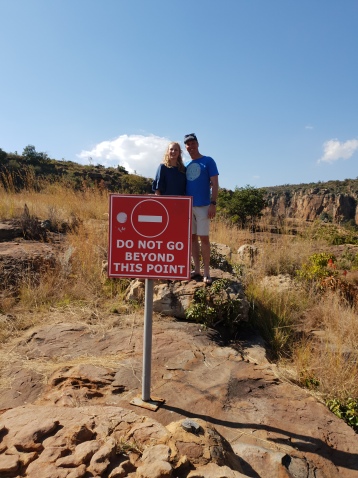 I saw the sign but chose to ignore it

So ladies, if you’re looking for someone who will ignore authority, break the rules of bureaucracy or ignore the rules that keeps society from becoming animals, but in a way that won’t get him arrested or killed, I’m your man.  Even though I’m taken.

A true rebel with a conscience and a sense of responsibility.  And I even convinced my daughter to join me in my life of crime.  What a day…