Frozen, desolate, leafless trees sticking out of the ground like brown, bony, monster fingers breaking through the barren soil to take over the world.  An eminent threat that has chased the colour green from the landscape.

Veld fires rage with crimson breath and a smokey desire to destroy roaming grasslands and leave behind scorched, apocalyptic fields of nothingness. END_OF_DOCUMENT_TOKEN_TO_BE_REPLACED

These three words are the universal shield all fathers will yield at some point in their lives, protecting ourselves from the arrows and fireballs spewed by mothers when we know we’ve done something wrong, and it involved their angels.

The year is racing towards the finish line, which implies school almost done and the summer break is waiting in the wings.  We are about to commence the process of loostening the bolts that keep our composure and sanity in tact and we can remove the stick from our asses.  It’s time for vests, baggies and flip-flops and whatever clothes woman will not be wearing.  It’s also time for a lot of sunburn.

In the spirit of soaking up the vibe we went to a dam on Saturday.  And with “we”, I mean three friends and a bunch of kids.  No wives.  But before I continue with the post I feel it important to act like a dictionary and explain the word “dam” to all those who is unfamiliar with this little word.

In South Africa we don’t have any natural lakes, as that was all given to the Americans.  We got gold and diamonds instead, so we’re not complaining.   But in order to allow bodies of water to accumulate throughout the country, we’re stuck with copying beavers i.e constructing walls in rivers.  General consensus being that this is done to create reservoirs of water for human consumption, when in reality the main reason is to generate entertainment for men.  Guys with jet ski’s, speedboats and catamarans.

One of the friends took his REALLY NICE boat along for the day and also provided numerous things to pull behind the boat.  It included waterski’s, kneeboards to more elaborate forms of blow up lilo’s and what not.  The dam was as flat as a mirror and the sun was cruising lazily along his path from East to West.  It was going to be a great day and the excitement of the kids was tangible.

Shortly after we arrived the kids were in the water, taking turns trying their best to stay on the floating devices as they were pulled behind the boat.  And Yes to all concerned, they were all wearing life jackets.  We’re men and that is not necessarily a synonym for irresponsibility.

When words fail me…

Just before I dove into the water I think I saw a devilish grin appear on the friend behind the wheel of the boat, but I shrugged it off as my imagination.  Once I finally got on this thing, which took a lot more effort than I care to admit, the boat leapt forward and we were speeding through the water like no dolphin ever could.  It was on.

Whilst moving at the speed of light, I was screaming instructions to Son for leaning left and then right, avoiding waves and the break of the water.  Fun, fun, fun. Speeding across the water surface, water spraying in our faces, laughing loudly with the adrenalin flowing freely though our veins….Until we flipped.

I did three superb somersaults before hitting the water, which actually felt like concrete at the time.  Knowing Son was with me a few seconds earlier, I desperately struggled to the surface and was relieved to see him floating a few meters away, unscaved.  Until he turned around…with blood on his face.  (Which is always such a great thing to see for any parent)  I swam frantically towards the boy and I’m sure, even that Michael dude from the Olympic games would have been impressed with my agility and technique.  I’m sure it only felt like I was splashing wildly, getting nowhere.

The boy was fine, it was a just nose bleed and he could count three fingers, even though I was only showing him two, but that’s a different story.  A nose bleed is relatively normal for any decent face plant on a human child.  I pulled him towards the boat and then the captain basically had a heart attack and nervous breakdown, simultaneously, upon seeing the boy.  Son had a very nice bloodstache developing on his face by now. 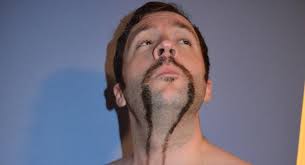 Once we were all in the boat and the bleeding was under control, I just grabbed my shield and held it up high and said: “Don’t. Tell. Mom.”  For I know she would probably kill me, only to revive me, and kill me again.

When we left the dam several hours later, because boys don’t really care about nose bleeds, they care more about adventure, the kids were sharing experiences in the car.  I had eight of them all packed tightly in my seven seater.  They were trying to determine who had the biggest wipe-out of the day.  My son ended the discussion abruptly when he said:

“Guys, it was me.  I wiped out and there was blood involved.” Case closed.  A hero was born.  And a smile, bigger than any Jack-o-Lantern ever made, was spreading across my face, for I knew another memory has just been logged in my son’s journey to adulthood.

And he did tell Mom.  As a matter of fact he couldn’t wait.